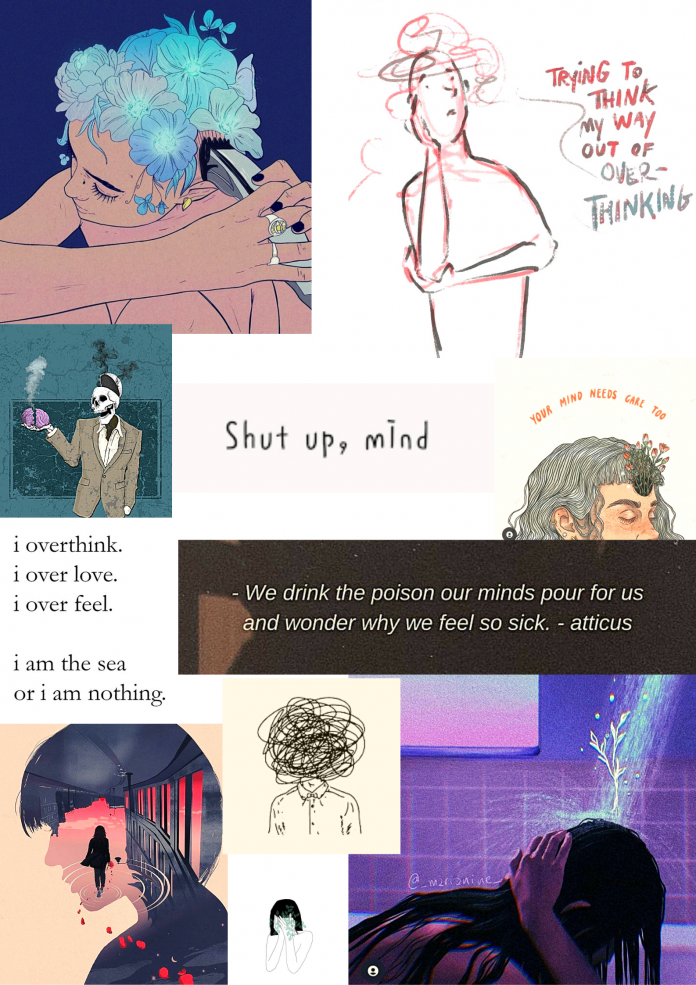 It takes a second for you to fall in,
And the smallest of things can trigger the spin.
A millisecond to become its addict,
And a lot more control to resist.

Often times, we prefer fiction over reality
We create scenarios and give it a partiality
Oh, how easy it is to be ruled over by make-believe
But when it gets too much, doesn’t it just deceive?

Conversations, memories, people, silence, music,
We’ll do the thinking with any choice you pick.
The process of thinking too much then takes a toll,
And between what is there and what could be, it makes us do a poll.

It’s not something that stops by just saying ‘don’t’
If you think saying it helps, it really won’t.
It’s not a voluntary action we take up
But, something that unconsciously comes and interrupts.

Yet, maybe there’s a way to pull away from this spiral
Maybe overthinking isn’t really the rival
If we’re thinking too much, might as well try to make it something positive
Afterall, positive is the result of double negatives.

Someone once told me that all it takes for you to not fall down in the spiral is the way you perceive your thought. If you direct the force towards something else, maybe it won’t be a fall down the spiral but rather something that’ll lift you up. Overthinking is basically thought after thought after thought. Instead of thinking about the worst, assume the best for the starting few times and allow your brain to build on that.
This was a rare time when someone gave me a breakthrough and I decided to take up on the advice. I did create scenarios in my mind, made things up and dwelled deeper into what was merely the seed-thought. It worked. I didn’t imagine the worst but rather the better. That took me to a different place. A place that didn’t get me to scream my frustration out. A place that led me to write and share this.
I think…A lot. Maybe sometimes a little too much.
It happens to the best of us. The mind can take us to odd places. The trick is to not linger there for too long, lest we forget to return.

The more I think of not thinking,
the more I keep thinking about it.
If turned around right, I might not keep sinking,
Rather go with dory and just keep swimming.